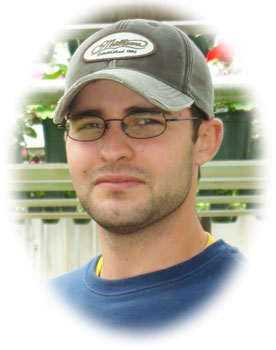 Andy was born January 21, 1983, in Centerville, Iowa, the son of Robert and Patti Lind, to whom he was the third child. His siblings are Elizabeth, Peter, and Alex.

After high school, Andy attended Indian Hills Community College where he earned an AA degree. He worked as a carpenter while going to school, but ultimately re-joined his brothers and father in the family greenhouse business. Andy was blessed with a wealth of talent in the areas of landscaping and carpentry. His true passion, however, was bow hunting, especially in the desert southwest with his friends and family. He made a home north of Mystic with his long-time love Alicia Schoolcraft and their dogs.

Andy is survived by his mother and father, his loving siblings Elizabeth of Washington, DC, Peter of Centerville, Alex of Mystic, and Alicia Schoolcraft of Mystic, as well as a far-reaching web of family and friends.

A Celebration of Life service will be held 10AM Thursday morning, June 2, 2011 at St. Mary’s Catholic Church, Centerville with Fr. Mike Volkmer and Rev Kathy Franzenburg officiating. The family will be present from 5-8PM Wednesday at the Lange Funeral Home, Centerville to greet friends. Burial of the cremains will be in Oakland Cemetery A memorial has been established to the “Andy Lind Memorial Youth Hunt” and may be left or mailed to the Lange Funeral Home, 1900 South 18th St, Centerville, Iowa, 52544

Condolences may be left at Lange Funeral Home.

Published in The Des Moines Register on June 1, 2011